Continuing the series of reader-based columns, today we look at two very different responses to previous installments based on arrangements of great circles. In the first case, woodworker Steve Garrison used the fact that all of the vertices of a cuboctahedron and an icosidodecahedron lie on four or six great circles, respectively, to create a sort of twisty puzzle. In his own words:

Each polygon has a magnet in each edge that is confined, but able to move around to change polarity so that adjacent parts always attract and hold the puzzle together. The puzzle can be turned and shuffled by rotating any of the hemispheres divided by either 4 or 6 great circle planes. Here’s a video that shows them. 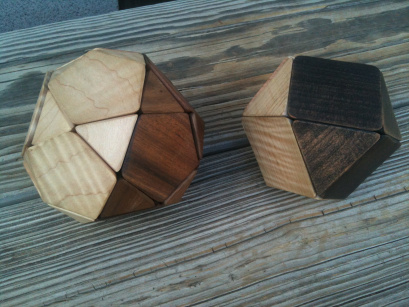 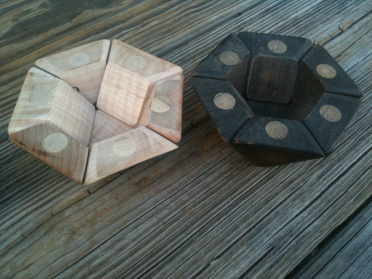 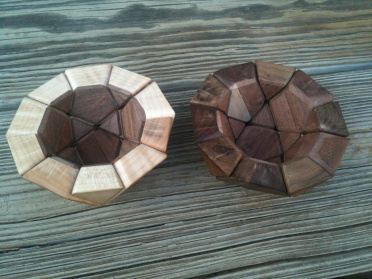 And in the second case, Martin Raynsford is at it again, topping all previous collations of intersecting disks to produce the following amazing arrangement of 31 great circles. He also posted a very nice description and photo-log of the construction of this arrangement. 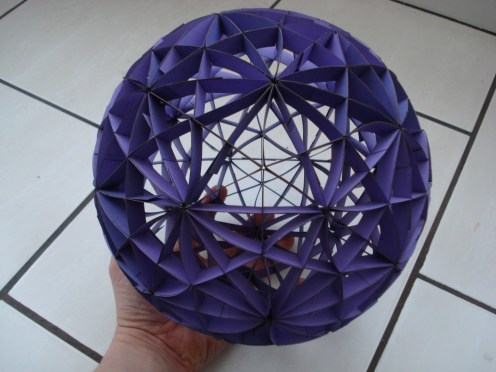 But note that in the world of great circle arrangements, more is not necessarily the only direction to go. I’d love to hear at mondays@momath.org about any new particularly geometrically interesting arrangements you may find. Speaking of email to mondays@momath.org, official kudos go to Christopher Weigel for the first correct response to the kite arch question from last time: a long string with kites at equal intervals all experiencing the same force from the wind will form a catenary arch. The key here is that the assumptions amount a constant force per unit length of the string, which is identical in form to the force experienced by a massive chain hanging under gravity suspended at two points.